The Jew, the Gypsy and El Islam 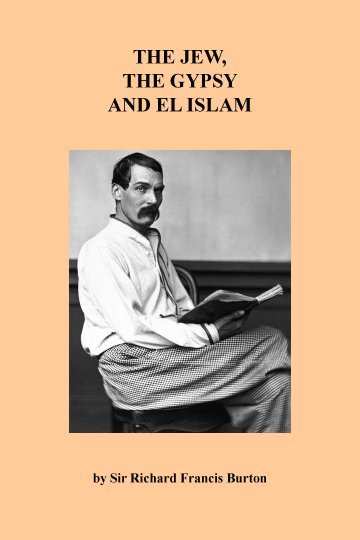 A NEW PUBLICATION OF BURTON'S BOOK IS NOW AVAILABLE. IT HAS BEEN NEWLY REPRODUCED WITH ELECTRONIC TYPE, AND HAS BEEN EXHAUSTIVELY PROOFREAD TO HAVE COMPLETE FIDELITY WITH THE ORIGINAL AS PUBLISHED IN 1898. THE FOREWORD SHOWS THE SORRY HISTORY OF THE ORIGINAL, FULL MANUSCRIPT OF "THE JEW" AND HOW THE JEWS ACCOMPLISHED "OBTAINING" IT.

COMPLETE AND UNABRIDGED AS PUBLISHED IN 1898.

See the top page for information on availability. 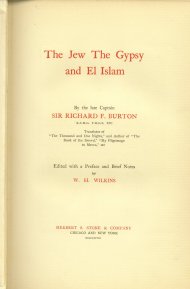 INFO re. THE FULL ORIGINAL MS. OF THE JEW IS FOUND AT THE BOTTOM HALF OF THIS PAGE

This is one of the two American editions.

Published in 1898 as one volume compiling three items originally intended to be books in their own right, or parts of books never finished.  This book was never reprinted by a large, mainstream publishing house, but has been occasionally reprinted by small, independent publishers.  However Jew-wise Burton may have been, he had a strange bias favoring Islamic practitioners and Gypsies.  As per the Preface below, this could have been due to Gypsy blood, but this idea was never proved.  The Jew, tho' heavily expurgated, retains much important information about its subject, as do the other two sections.

All known original editions were:

Repaginated to put exactly two original pages onto each new page, except where impossible due to space constraints.  In full text with frontispiece illustration.

II.  The Gypsy (Parts I and II delineated by line): 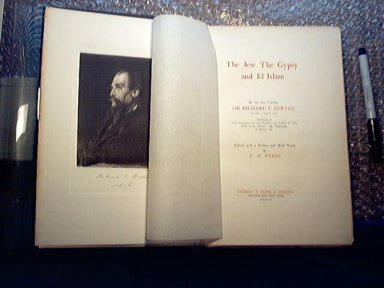 "Indeed, whenever in these days we hear of a new 'religion' having been born into the world, we may determine, à priori, that it is more Jewish than its predecessors."

"The Magnate [of Hungary] . . . sees all his rich estates . . . passing out of his own hands, and contributing to swell the bottomless pocket of the Jewish usurer.  But the Magyar is a fiery race; and if this system of legal robbery be allowed to pass a certain point, which, by-the-bye, is not far distant, the Jews must prepare themselves for another disaster right worthy of the Middle Ages.  And they will have deserved it."

[Compare with 1911 ENCYCLOPEDIA BRITANNICA, HUNGARY: "The Jews . . . monopolize a large portion of trade, are with the Germans the chief employers of labour, and control not only the finances but to a great extent the government and the press of the country. Owing to the improvidence of the Hungarian landowners and the poverty of the peasants, the soil of the country is gradually passing into their hands." (vol. XIII, p. 897).]

Burton wrote his words in 1873.  He was on-target on so many matters.  His works deserve to be referred to again and again, today.

"Every day, I think less and less what others are going to think.  . . . What are they going to say about me?  . . . That I'm wrong about the way the world really is?  That I'm an evil, murderous mastermind?  That I'm too extreme?  That I'm a greasy, slimy, Jew-Gypsy roustabout who looks at the world through a carny's eyes?"  -- Father of modern Satanism Anton LaVey, quoted by Blanche Barton, The Secret Life of a Satanist: The Authorized Biography of Anton LaVey (Feral House: Los Angeles, 1990), pp. 225-226.

[JR Note:  Anton LaVey's daughter Zeena has recently revealed that he was not literally part-Gypsy, so the above may be taken as somewhat metaphorical.  But he was definitely part- Jewish; his father was the Jew Boehm]

Another Jew-Gypsy (but who I am NOT implying is a Satanist!) is Isabel Fonseca, author of Bury Me Standing, a book that, like Burton's, is sympathetic to its subject, but which shows the generalizations about the Gypsies to be essentially true.

The Statement of Aleister Crowley re. Burton's Manuscript  -  "Human sacrifices are today still practiced by the Jews of Eastern Europe, as is set forth at length by the last Sir Richard Burton in the MS. which the wealthy Jews of England have compassed heaven and earth to suppress..." — from the intro. to Sepher Sepheroth, pub. in The Equinox (Crowley's occult journal), quoted by Craig Heimbichner, Blood on the Altar, Independent History & Research, Coeur d'Alene, Idaho, 2005, p. 19.

Five months before Burton's planned retirement, when he made it very clear he intended to publish The Jew with details of the cult of ritual murder he uncovered and documented during his consulship in Damascus, he died (1890, age 69).  His wife Isabel also intended to publish the full work (see her Life of Sir Richard F. Burton, 1893, Vol. II, pp. 454-5, wherein it was described as "quite complete"); she died soon thereafter (1896, age 65).

[Additional info on this whole sorry episode of Burton's life from Isabel's perspective may be found in her Romance of Isabel, Lady Burton, 1897, Vol. II, Ch. XV:  Gathering Clouds and Ch. XVIII:  The True Reasons of Burton's Recall, exposing all the political and financial machinations for which Jews are known.  See also her little-seen Inner Life of Syria, Palestine, and the Holy Land, 1875, Vol. I, pp. 331-43 for an intriguing discussion of the money-lender problem].

In the process she apparently had a change of heart, as she supposedly left instructions that it be burned (this from a "recently discovered" piece of paper "found" among the MS. materials).  One of her executors, her sister Mrs. Fitzgerald, was looking for a publisher, and died in 1902.  Editor W. H. Wilkins, who had not published the offending passages with The Jew, the Gypsy and El Islam in 1898, (the Jews had threatened libel action), but who hinted that he may have done so in the future, died in 1905 at age 45.  (What was published was just the preface and most of one chapter; what Wilkins called the "Appendix" was in actuality the majority of the work).  Then a bit later, the Jews (in the form of David Lindo Alexander, president of the Board of Deputies of British Jews [ David Irving info ] vs. Manners Sutton, publisher) sued in court over the "assignment" of the manuscript, and won!  Supposedly, the surviving executors had handed over the MS. to the Jews in 1909, under circumstances we can only wonder about, as it seems odd that Sotheran, a publisher, had already sold the MS. to Manners Sutton, thinking that the deceased Wilkins (from whom they had received the MS.) had been a qualified agent.  No doubt money played a hidden role in this.  Reading recent reports regarding the sale of the MS., it seems that the claim that Alexander simply "bought" the MS. is making the rounds.  For a contemporary account, see The (London) Times, 28 March 1911, p. 3, col. 3  [ facsimile graphic ] describing the court case of the previous day.  The old adage "possession is nine-tenths of the law" didn't count that time.  Another judicial murder -- of the truth.

Since 1911, the original MS. has been under lock and key in the Board of Deputies of British Jews archives, filed under the heading "B2/9 16A, Burton Book . . . (v) Manuscript of an unpublished book by Sir Richard Burton and surrounding action by the Board to obtain it."

Geoffrey Alderman, professor of Jewish history at Touro College, New York, and author of the standard work Modern British Jewry, said: "I am delighted the book failed to sell because this will force the board to reconsider. They have divided the community with a decision which ought never to have been taken.  I have seen the manuscript and I think it should be made available only to bona fide scholars.  I was shocked that a man of Burton's intelligence should believe the blood libel, but I think his allegations still have resonance for far right groups today."

Hmmmm . . . But Prof. Alderman can't explain away how the body of Father Thomas was found exactly where the Jews said it would be found.  No amount of torture could have wrangled that from them if they really didn't know where it was, eh?

"A most barbarous secret for a long time suspected in the Jewish nation. . .at last came to light in the city of Damascus, that of serving themselves of Christian blood in their unleavened bread. . .a secret which these 1840 years must have made many unfortunate victims."  Jasper Chasseaud, U.S. vice-consul, Beirut, Lebanon, in a letter to John Forsyth (1840-MAR-24, no. 12), microfilm 367, State Department archives, U.S. National Archives.

As reported by Christie's in their detailed description, the following may now be documented.  Items in blue with an asterisk (*) were made part of the published version, 1898, reproduced above.  As can be seen, the remainder, which Wilkins collectively referred to as the "Appendix", constituted the majority of the work and was never published.  The published version corresponded to about 70 pp. of handwritten MS.;  the total was 180 + 126 pp. in two sizes, thus about three-fourths remained unpublished:

"Human Sacrifice among the Sephardine or Eastern Jews"

>  "To the Reader" introduction, wherein Burton states:  "The statements contained in these pages must, if untrue to fact, be speedily buried in the limbo of vagaries and dreams.  If true, they open up an unknown chapter of Modern History which deserves careful perusal".

A few SOURCE MATERIALS Burton consulted for his MS.

The documents presented here were written by people who thought the contents were true at the time they wrote them.  History herself must make the final judgment.  These documents were available, at the time Burton wrote, in at least two languages: French and Arabic, both of which Burton understood.  Their inclusion here is not meant to incite hatred or revenge, but merely to inform, for individual research and archival purposes only, and represent but a small portion of the complete trial record, which ran into the hundreds of pages.  The source shall remain anonymous.

I'm afraid the proverbial "cat" is long "out of the bag"; continued suppression of the Burton MS. would serve no useful purpose.  We already know most of the details from other sources, and we know Burton's conclusion regarding the case (see The Jew, p. 128), and the fact that he was "canned" by the British establishment simply for dealing with the Jewish problem in an objective manner during the course of his consulship in Damascus (he had refused to show preferential treatment by collecting their debts; this echoes the sentiment of Cochelet to Thiers shown in red in the 5/15/1840 correspondence within "DOCUMENTS" above:  "It appears to me that it is not the jurisdiction of an employee of a Great Foreign Government to appoint himself as defender of the murderers of a clergyman protected by the French Government...").  A strong hint is contained on pp. 80-81, starting with "Rabbinical religion is rampant in the kitchen" -- he concludes this with "On the eve of the Passover the chief Scribe attends the oven, and mixes what he pleases with the cakes, which are then sent round to the congregation."

Some related pics.  The tomb; the victims; Moloch; the Rothschilds.

Some references regarding this subject in books about Burton: