*** THIS PAGE OFFERS A FEW EXTRACTS FOR PURPOSES OF ILLUSTRATION.  FOR THE COMPLETE BOOK, SEE THE FULL VERSION HERE. ***

This book is an amazing treasure trove of information on early Europe, though concentrating heavily on the British Isles.  The several chapters shown here were taken from late in the text, as they are more summary in nature.

Waddell was no pan-Aryan, thinking that Aryan blood was concentrated in Britain and almost nowhere else (he keeps putting Germans down as "round-heads", just because a few round-headed skulls were found in Southern Germany, and ignores the existence of a common Teutonic culture where the Aryan type predominates), but his work is still valuable for its extensive use of arcane material.

He also insists on using the terms "Slav" and "Hun" as terms for ancient peoples, but these terms are medieval in origin. {see notes 1, 2}  He also silently slides past Tacitus' detailed description of the ancient Germans in Germania, much of which would seem to ditch his "Germans are really the same as Slavs" agenda.  Tacitus said (98 AD): "As to the Germans themselves, I think it probable that they are indigenous and that very little foreign blood has been introduced either by invasions or by friendly dealings with neighboring peoples." (Mattingly transl., 1948.  Mattingly was also anti-German.  The English worshipped Rome because it served as a model and justification for their own empire).  Tacitus gives no indication that their culture was anything but self-generated, and complimented them on it.

It is incontestable that Southern Germany (and Austria and Switzerland) had, at one time or another, heavy Celtic habitation, but Southern Germany does not constitute all of Germany.  Waddell makes a case (p. 186) for the "Aryanization in speech" of Germany by King Brutus' descendants (see also p. 157), but doesn't explain why this Aryanization would not have extended to intermarriage and thus Aryanization of the people themselves.  He addresses this subject on pp. 363-4, but one wonders just how universal the no-mixture attitude may have been.  Regardless of exactly when or how the Germans may have been Aryanized, it appears obvious that they are in fact Aryan, with their hard work ethic, lack of self-pity to the point of denying themselves to help someone in a foreign country they don't even know, respect for the rule of law, concern for the environment and animals, etc., all "to a fault", i.e., almost always to the benefit of someone else.  There are also the obvious physical attributes.

1.  The Huns began as a tribal group in Western Asia, and did not begin to attack Europe until the 4th-Century AD.  Before that they were apparently relegated to Mongolia and other far-flung eastern regions (i.e., in Asia) where they gradually disappear into history.  Thus, the Huns cannot be identified in Europe in the far-ancient times ascribed to them by Waddell.  The Old British Chronicle supposedly mentions "Huns" (in Scotland!) but from where did that translation arise?  And how do we know they had anything to do with the people later known as Huns from Western Asia?

2.  The term "Slav" arose in the 18th-Century through the German theologian August Shloezer (1738-1809), under Russian direction (he needed to please his employer, the Czar).  It is derived from the glagolitic church Latin term "Sclavi", and refers to a servant, pagan or heathen of any origin.  What Waddell called "Slavs" would more accurately be called "proto-Slavs", or even better "Sarmatians", since the source for these peoples was the area known historically as Sarmatia which lay to the east of the Vistula River.  The Venedae (Wends) were a related people.  They were invaders from the east and are not European in origin.

CHAPTER 12.  WHO WERE THE "CELTS" PROPERLY SO-CALLED? [Mentions Broca]

CHAPTER 20.  SUN CROSS OF HITTO-PHOENICIANS IS ORIGIN OF PRE-CHRISTIAN CROSS ON BRITON COINS AND MONUMENTS AND OF THE "CELTIC" AND "TRUE" CROSS IN CHRISTIANITY.

CHAPTER 23.  ARYAN PHOENICIAN RACIAL ELEMENT IN THE MIXED RACE OF THE BRITISH ISLES AND ITS EFFECT ON THE PROGRESS OF BRITISH CIVILIZATION. 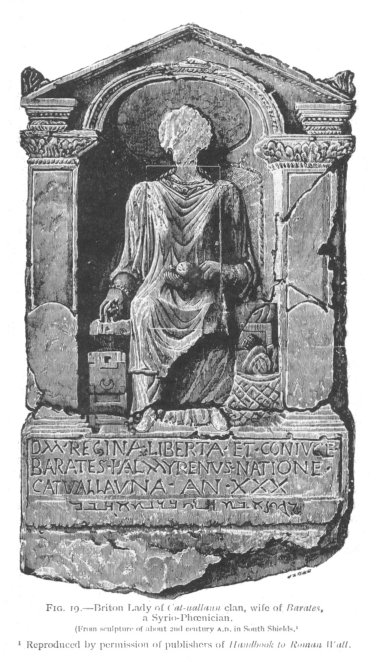 Horror writer H. P. Lovecraft (1890-1937) shared many of Waddell's ideas about race, tho' he identified with  Germanic ancestry and knocked the Celts.  I would take issue with compiler Trumbo's scolding Lovecraft over non-inclusion of Slavs as part of the White race -- in fact they are heavily compromised by Asiatic blood -- but to each his own opinion.  Files archived from the Vanguard News Network:

When, long ago, the Gods created Earth,
In Jove's fair image Man was shap'd at birth.
The beasts for lesser parts were next design'd;
Yet were they too remote from humankind.
To fill this gap, and join the rest to man,
Th' Olympian host conceiv'd a clever plan.
A beast they wrought, in semi-human figure,
Fill'd it with vice, and call'd the thing a NI99ER.

Yes, Lovecraft used the correct uncensored word, but I have altered it here to help defeat the simplest of "hate" web filters.  According to Joshi, this poem was not published; "The text survives, however, in a hectographed copy, which suggests that Lovecraft may at least have passed this poem around to friends or family; it is likely that they approved--or at least did not object--to his sentiments."

"History tells us that the Gauls too had their hour of military glory; but since that time a life of ease has made them unwarlike: their valor perished with their freedom."  -- Tacitus, Agricola, 11