The True History
of the
Conquest of New Spain

A NEW PUBLICATION OF BERNAL DIAZ' THE TRUE HISTORY OF THE CONQUEST OF NEW SPAIN IS NOW AVAILABLE.

See the top page for information on availability.

Rough text is available below in HTML.
This is the complete text as published by Keatinge in 1800 (see notes below). 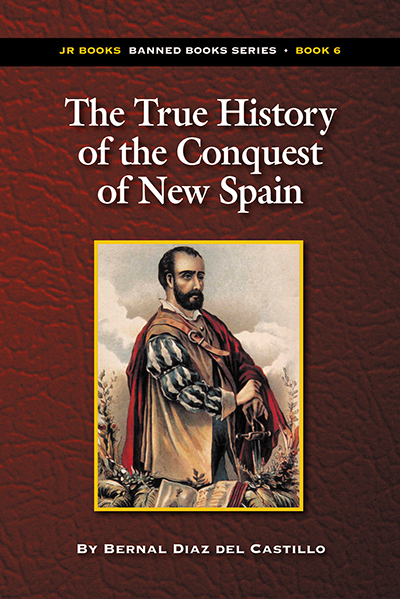 Bernal Diaz del Castillo (c. 1496 – 1584) wrote an important first-hand account of his experience supporting Hernan Cortes in the conquest of Mexico, 1521. It's a straightforward account of a soldier, not the dainty and carefully balanced prose of an academic. This treatment is the Keatinge translation as published in London, 1800, OCR'd from a facsimile of the original. This is not to be confused with the highly edited translation of Cohen, 1963, available on Penguin Books, short extracts of which are found on the Web.

The manuscript was written sporadically, at first sometime during 1552-7 (consisting of the first 16 original chapters), then 1564-80, but Diaz and his family could not manage to get it published during his lifetime. A version was found in the records of the (Spanish) Council of the Indies by Licenciado Lorenzo Ramirez de Prado, who brought it to the attention of Fray Alonso de Remón, who edited it and had it published in Madrid in 1632. It is this version that the Keatinge translation is based upon. However, using word counts, it appears that Keatinge translated only about one-half of the Remón manuscript. Unfortunately, Keatinge supplied no comments as to why he did this, nor what criteria he used to abridge the material. The 1803 republishing of Keatinge simply reproduces the 1800 text (split into two volumes) with minor typographical corrections and has no more information on this matter.

There is probably no "definitive" manuscript; no known copies are exclusively in Diaz' hand, although the "Guatemala manuscript" apparently has portions in his handwriting as well as his corrections. He constantly toyed with the text over many years and had intermediate copies made.

Herbert Cerwin, in his Bernal Diaz, Historian of the Conquest (Norman, OK: University of Oklahoma Press, 1963) gives a good discussion of the manuscript problem: Cerwin Chapter 16. Remón's edition has been criticized for many years for having tinkered with the text, but Cerwin, p. 202 states, "The manuscript Bernal Diaz sent to Spain in 1575 disappeared and has never been found. Those who indict Remón for altering the narrative could well be wrong, for they use for comparison the Guatemala manuscript, which Bernal changed and edited until the very last. It is quite likely that the 1575 manuscript differed from the copy retained in Guatemala. [Footnote 5]: Wagner, 'Three Studies on the Same Subject,' ... 168-69, expresses the theory that the manuscript Bernal Diaz sent to Spain was an earlier draft than the Guatemala manuscript and that Remón may not have made all the changes of which he has been accused."

The original text used old printing typography with 's' like 'f', ligatured 'ct', etc. I have changed these to standard modern 's' and 'ct', for the convenience of modern readers.  However, original spellings, now archaic, like 'plaistered' (for 'plastered') or 'shewn' (for 'shown') have been left as-is. (Also, back then the past-tense of 'eat' was apparently also spelled 'eat'). It saves on editing time, plus it gives something of the feel of the language of the original book.

NOTE:  Diaz was never called "Captain" at any time during his life. His family started using the term at a certain point just because they thought he deserved it.  Keatinge nonetheless put "Captain" on the title page (perhaps the facts of Diaz' life were not fully known at that time to the English-speaking world). In the Spanish army, the highest rank he held was sergeant standard-bearer, and then for only a short time. He was never a permanent-rank officer. In civilian life, he was variously an encomendero (like a feudal baron, but he was not wealthy), procurador general (general council), fiel ejecutor (inspector of weights and measures) and regidor (city councilman).

Keatinge originally used "Mexico" instead of "New Spain" in the title, but I have decided to defer to Diaz and use what he had always intended.

A Spanish version is here:

(This version appears to be heavily abridged/edited and has been modernized in language).

THE FREE STUFF. NOTE: The files below were not exhaustively proofread, and many errors remain from the OCR and initial editing operation. The new publication of this text, referred to above, has all the errors gleaned out and overall has been greatly improved from what may be seen for free below.

Arrival of the armament commanded by H. Cortes, at St.
Juan de Ulua. Transactions and occurrences there.

The Spanish army advances into the country.

March of the Spanish army for the city of Mexico. Wars
in Tlascala. Submission of that nation.

The Spanish army proceeds on its march to Mexico.

Mexico, November 8th, 1519. Description of that court
and city. Transactions and occurrences there.

Expedition of P. de Narvaez. His army defeated by Cortes
at Cempoal, May 26th. 1520.—Return of the Spaniards to Mexico.
War there. Death of Montezuma. Expulsion of the
Spaniards, July 1st. Battle of Obtumba. Reception of the Spaniards
in Tlascala, July 10th.

Tlascala, July, 1520. Transactions and occurrences there.
Foundation of the colony of Segura de la Frontera. Subjugation
of the neighbouring districts by the Spaniards.

Transactions and occurrences in New Spain subsequent to
the conquest.

Transactions and occurrences in Old and New Spain.
Expedition against the Zapotecans.

Expedition of Cortes to Higueras.

Return of Cortes to Mexico; occurrences there. Return of
the author to Mexico.

Cortes goes to Europe; is created Marquis of
the Valley of Guaxaca. Account of various transactions and occurrences in
Old and New Spain. Death and character of
the Marquis of the Valley.

Enumeration and account of the valiant companions who
passed over to the conquest of New Spain with the most adventurous
and magnanimous Don Hernando Cortes Marquis of the
Valley. Advantages resulting from the conquest—Transactions at
court. Concluding observations of the author.