Horrific, Offensive Filth the Nazis were Fighting Against

Take a look at this wonderful graphic: 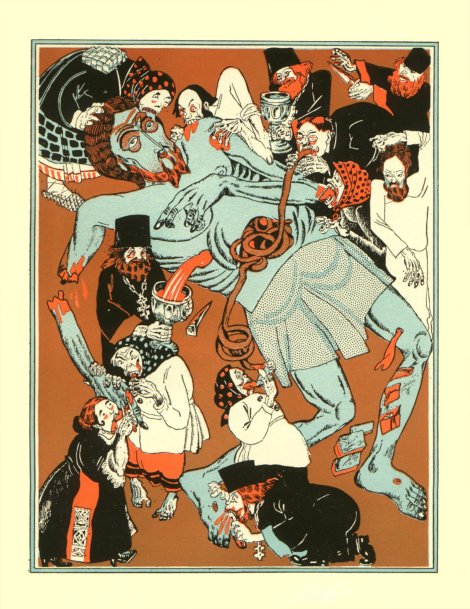 "A front page cartoon, reproduced in original colors, from The Godless, illustrated anti-religious weekly published in Moscow by the Communist Party of Russia.  A careful study of the detail will disclose a particularly vicious sacrilege, depicted in a style now called "advanced" or "Russian" art.  The translated caption reads:  "Take, eat; this is my body."  (Matt. 26; 26.)"

The above was considered especially offensive, as it attacked the very essence of Eastern Orthodox Christianity, and callously trashed it.  Jews hated traditional Russians and everything about them.  Now, I'm not Christian myself, but I will always be sensitive to offenses against any bona-fide White group, regardless of religion.  (Russians are a complex melange of many disparate ethnic groups, including Mongol, but many have Aryan blood.  Kiev was founded by Vikings; Russia is named for the Nordic Verangian "Rus").

So maybe now you can at least get some idea of what the Nazis were talking about all those years.  The Bolshevik-Communists led a full-fledged assault against Western culture and all that is decent and civilized.  Communist organizations had been set up throughout Germany between the wars, and had even briefly captured the government in Bavaria!  [Also, the national government of Hungary -- see Louis K. Birinyi on this site].  The Media pretends that things like this never existed, that the "persecution" of Jews, Communists and assorted motley left-wingers was only due to "prejudice" and "bigotry", as if all those Nazis just got up on the wrong side of the bed one morning and said, "hey, let's start oppressing all those helpless, holy Jews".  Sure.  Jews were a major component of all those subversive movements.

Here's probably the most intelligent thing the "home-front" folks should have been worried about during the (Jew Studs Turkel's) "Good War".  Remember, this was the time that Americanskis were really concerned about the "Naahhh-zees" invading the USA, when the Germans hadn't been able to successfully invade across the 25-mile English Channel: 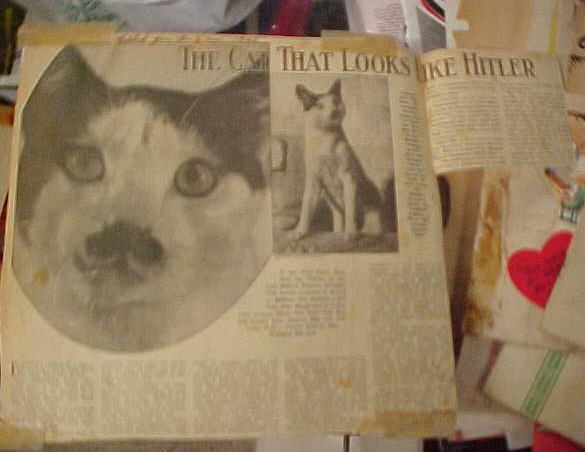 Literally, a Nazi under your bed!

The Allied press constituted a "Pro-Red Orchestra" for all the years between the wars, and during WW II.  [*  See links at bottom of page]  Our wonderful, free and open democratic press, unaffected by hidden interests, naturally gave us a fair, impartial and objective appraisal of the complex questions at hand, as can plainly be seen by the graphics below.  Aloof from the Holy War, our martyrdom was secure.  And our industries always practiced a reserved, noble kind of patriotism, unknown anywhere else in the world.  Obviously, since we were the Good Guys, with "God on our side", we didn't have to resort to the kind of base-minded, lowest-common-denominator propaganda those knuckle-dragging, Neanderthal Nazis produced.  Nyyaaaaahhhhhhhh................. 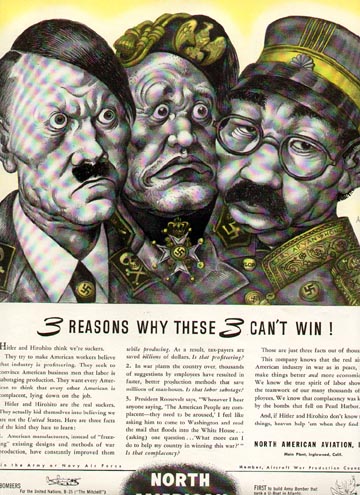 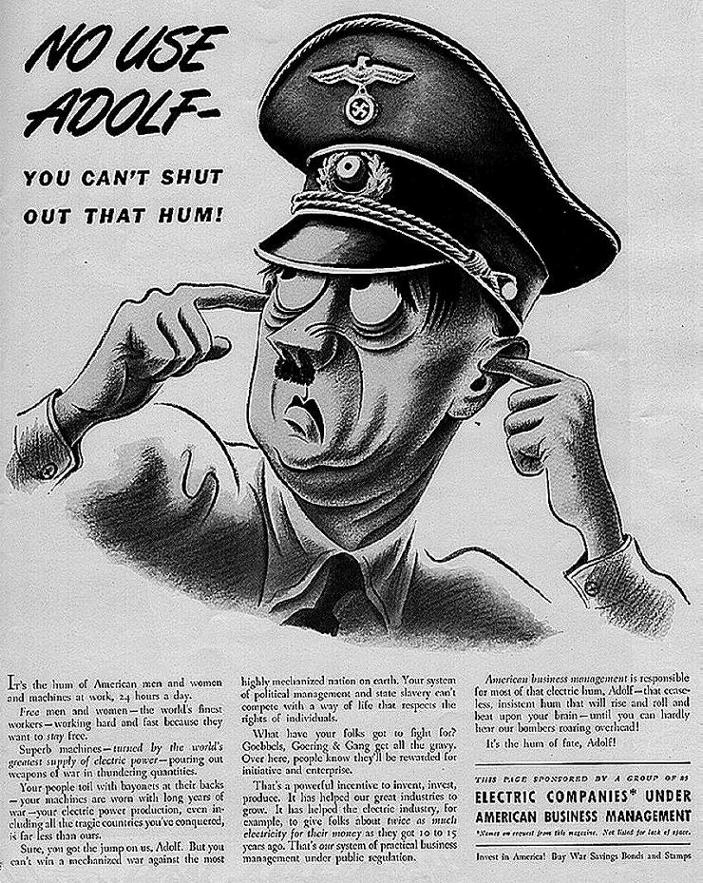 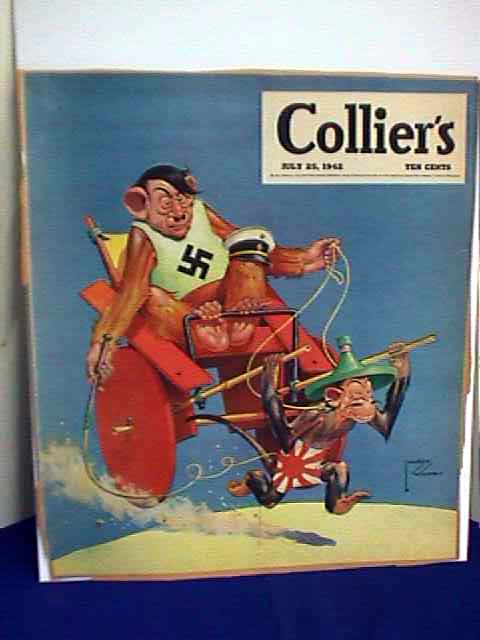 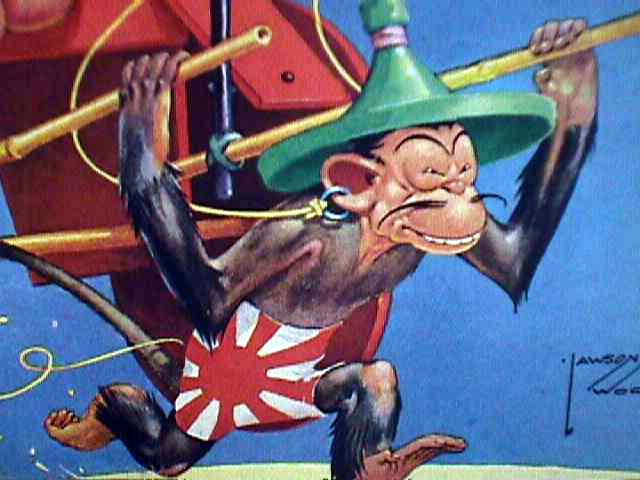 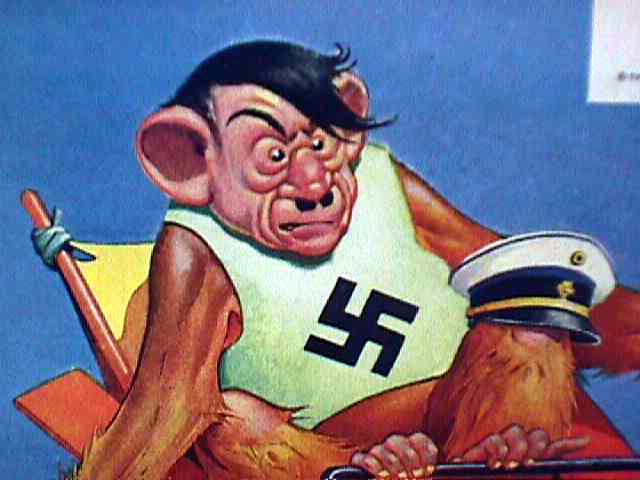 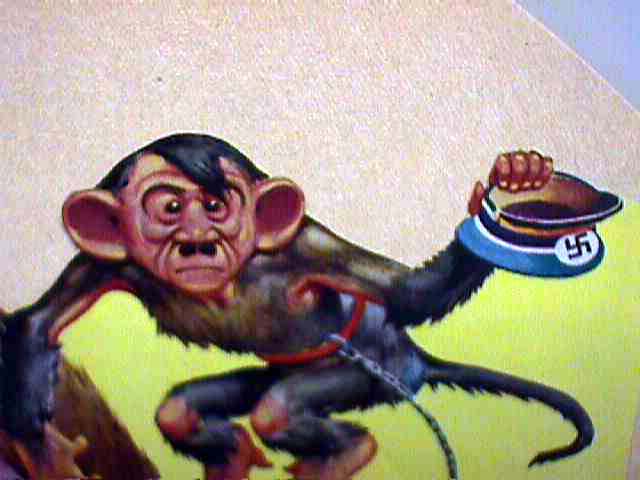 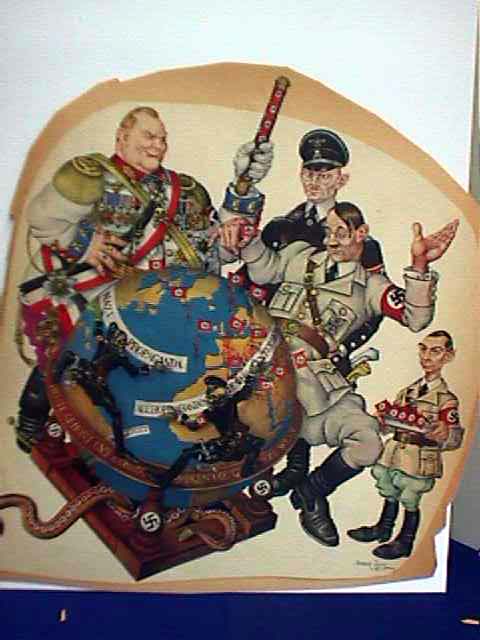 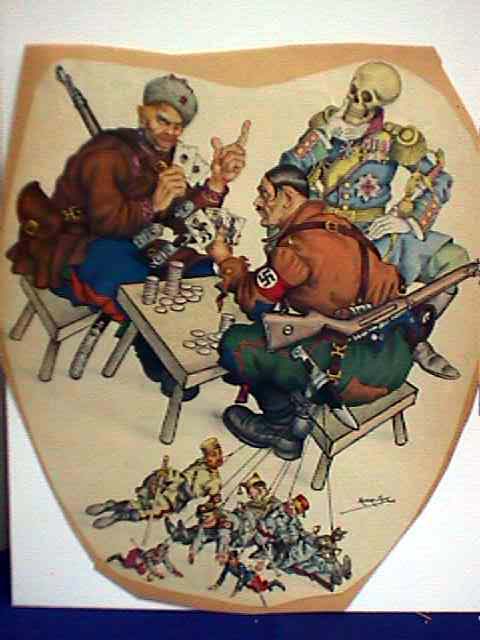 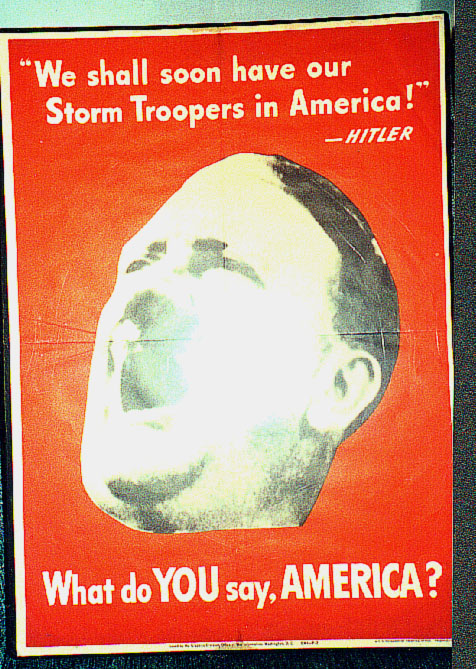 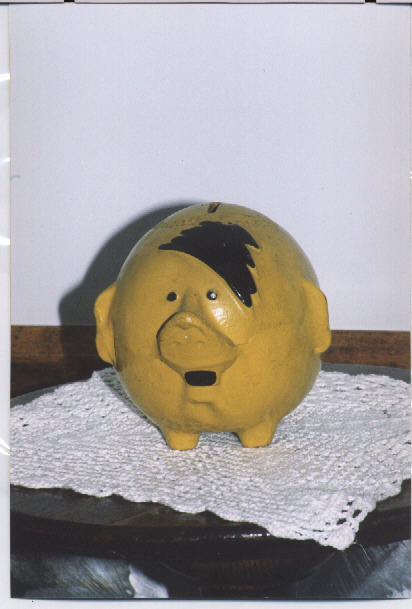 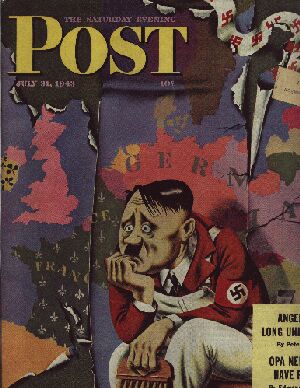 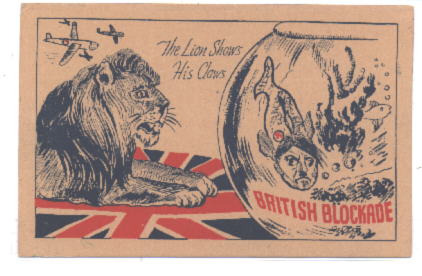 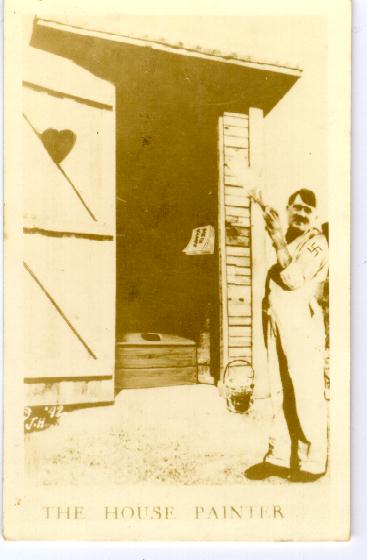 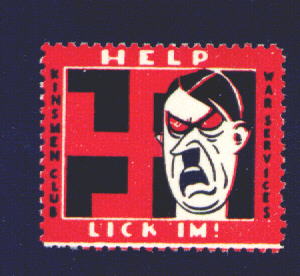 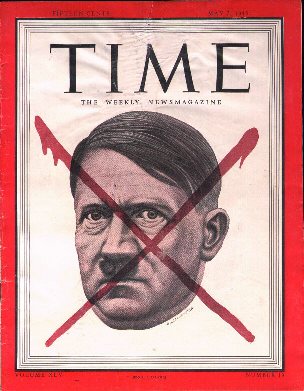 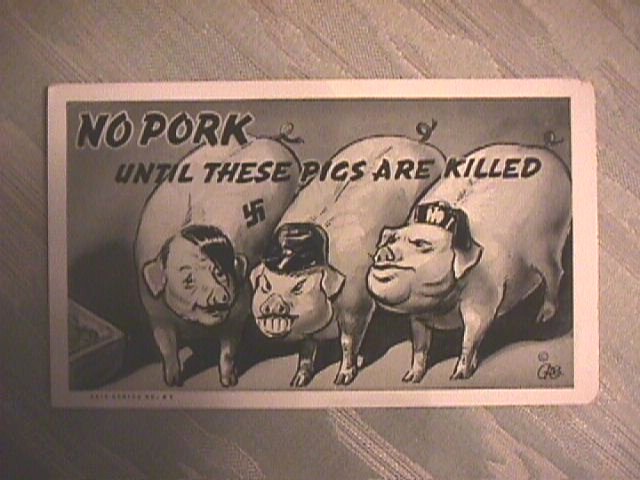 Reality check:  Yes, Nazi propaganda sometimes degenerated into crude caricature, even involving likeness to animals, but, remember, we always said we were better than they were.  We had no excuse.  Nazi propaganda, unlike the Allied type, tended to lack one major component: hypocrisy.  Some of the worst racial caricatures of the war were American portrayals of Japanese.  We also had forced sterilization of criminals and the retarded, uninformed-consent medical experiments, euthanasia, eugenics and a host of other "Nazi" things too, but that is straying from our immediate subject.

Nazi propaganda as presented by a PC source, but revealing:  http://www.calvin.edu/academic/cas/gpa/index.htm.  Compare for yourself.

For a BIG archive of various propaganda posters, see http://www.earthstation1.com/warpostr.html.  Also go to their main site for a vast amount of archival material.

I hesitated to present the following, but I think the cause of historical truth demands it.  The webmaster of the site originally hosting this material (at http://vatican.rotten.com/axis/; page now defunct) had said "What is most unusual about these are their highly explicit nature.  It is in fact the most extreme propaganda from the war that we've ever encountered."  I'm sure.  Please do not go here if you are easily offended by explicit sexual representations (note, however, that these are just B&W line drawings, and were meant to be amusing).

NOT FOR CHILDREN:  Archive of "Licking the Axis Powers" Cartoons

Particularly revealing is the fixation on sodomy, esp. from dark North Africans lining up to "give it to" Euro leaders.  For clues as to the origins of these tendencies, see my Burton Arabian Nights (Eastern Sexology) page.

*  Links proving pro-Red press sentiments.  Of course, this is just a sampling of the many excellent books and articles related to this wide-ranging subject.  Wow, the £50,000 slush fund from the jew Sir Bernard Waley Cohen and that £20,000 legacy and other financial help from the jew financier Sir Henry Strakosch, which saved the Churchill family from ruin, seems to have had a profound influence on the morals of Sir Winnie: 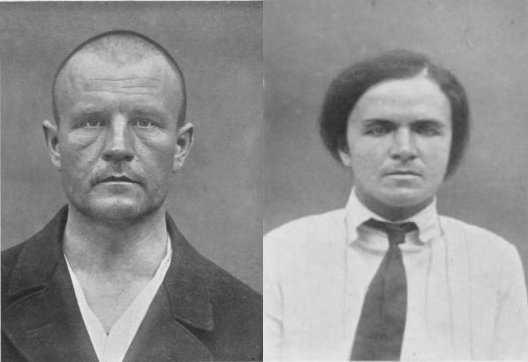 This charming, blushing couple is Joseph Peczkai and Dr. Helen (Mrs. John) Peczkai.  Apparently, there is some relation (in-laws?).  They were just two of the thousands of vermin who participated in the Hungarian communist revolution of 1919, delightfully torturing and murdering everyone in sight.  The Nazis fought against such human garbage, only to be defeated by the "Allies" -- such is the thanks the Nazis got.  Ever since, vast numbers of Peczkais have been allowed to emigrate into Western countries with the blessing of "democratic" governments. For more info, see the Cécile Tormay page.