These are books the NWO crowd dearly hopes would just go far, far away.  But, I will show parts of them here.

These first came to my attention via Pelley's DUPES OF JUDAH -- A Challenge to the American Legion.  Pelley said, "This Cleveland Hungarian was in possession of the facts.  He was tossing 'em out in paragraphs that scoured".

These books show the fiasco of WW I from a Hungarian perspective.  In the popular press, we often hear about Germany, and maybe a little about Austria, but almost never about Hungary in this context.  The injustices impressed against her differed little from those visited upon Germany and Austria.  This is a good antidote against those who would prefer to believe that world war revisionism is only about Germans crying "sour grapes" about wars they lost.  I'm afraid there's a lot more to it than that.  One has the perfect right to "cry" about lying, duplicity and hypocrisy.

Birinyi calls attention to the nefarious combination of world jewry and banksterism in causing WW I and in constructing the horrific Versailles Treaties which created a state of perpetual instability in Europe.  In 1938, at the threshold of the next world war, he put out a desperate plea for reason, but alas was ignored.

Birinyi proves that the pernicious nature of the Versailles Treaties was due to the fact that they were merely a rubber stamp to agreements already made in secret amongst the "Allies" and a motley collection of shadowy internationalists.  Germany, Hungary, etc. only signed under the duress of heavy blockade that had reduced their countries to starvation.

Ultimately, the value of a work resides in its predictive power.  In The Tragedy of Hungary, 1924, p. 305, Birinyi says:  "The Invisible Power in Europe is planning another war.  If the dogs of war once more will be let loose, there will not be much left of Christian civilization".  Statements like this can't be faked when they occur 15 years before the actual happenings.  Subsequent confirmation of Birinyi's prediction was provided by the Jew Count Mensdorf, Austrian Ambassador to England, quoted in "Silent Invasion of America":

"Israel won the war, we made it, thrived on it, profited from it.  It was our supreme revenge on Christianity."

We are not trying to fight WW I all over again here.  The point is that the same forces that guided world events in 1914 are guiding them now -- internationalists, globalists, one-worlders, universalists.  We must be prepared for the predictable results.

"[English Secretary of Foreign Affairs Sir Edward] Grey was doubtless as much of a hypocrite in the week before the War as he had been eight years before that. We attacked Germany for three reasons: (1) to down her navy before it got any larger; (2) to capture her trade; (3) to take her colonies."

"The real aggressor is not he who first employs force, but he who renders the employment of force necessary". 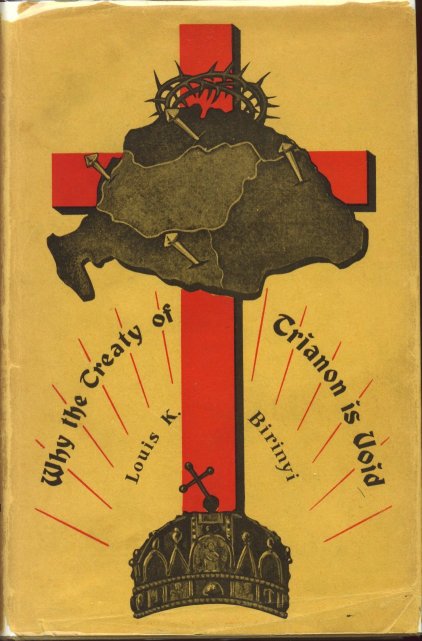 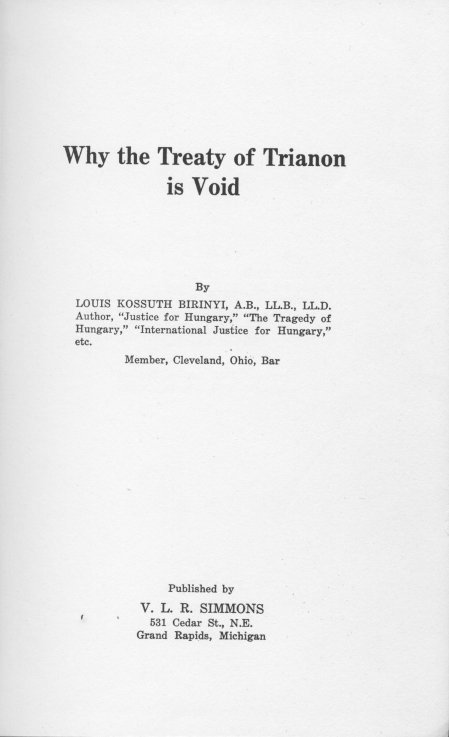 Trianon (1938) was essentially a re-write and refinement of Tragedy (1924).  It dumped the Jew-wise ethnic material in favor of more legalistic arguments.  Whole book:

Chapter 3 -- Hungary Before the World War

Chapter 5 -- The Corruption of the French Government and Press

Chapters 9 & 10 -- The Secret Agreements & The Allies Are Guilty

Chapters 11, 12 & 13 -- The Paris Peace Conference, The Betrayal of Justice and Decency & The Treaty of Trianon Was Forced Upon Hungary

Chapters 16 & 17 -- Our Conclusion & Our Plea to Christian Civilization. Hungary Must be Revived and Reconstructed 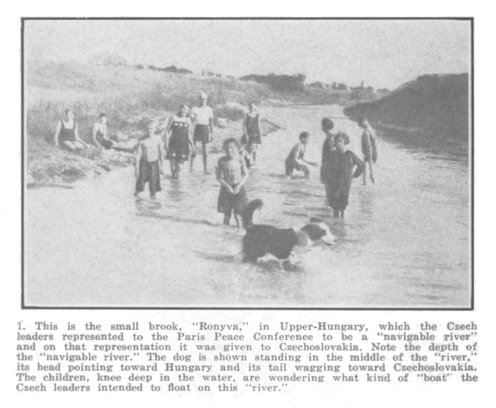 Yep, we "made the world safe" for calling guppy streams navigable rivers! 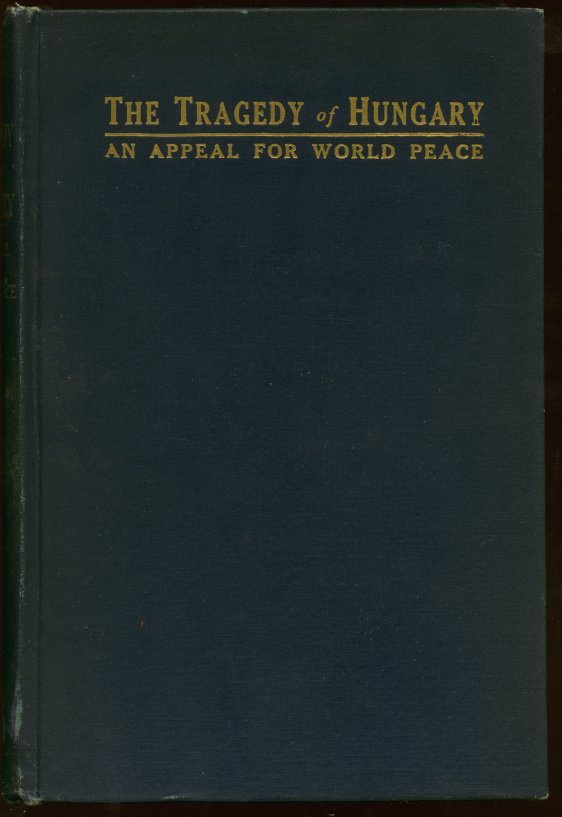 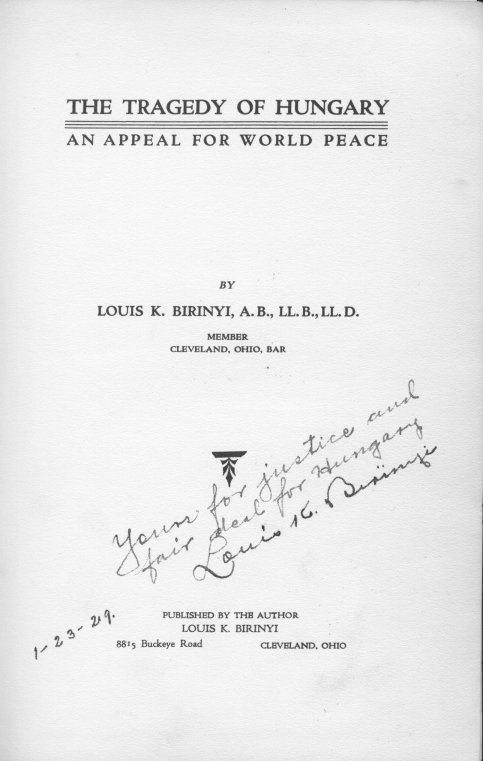 The Tragedy of Hungary (1924) was more hard-edge than Trianon, as it included much Jew-wise material.  In some chapters, I have noted where the graphics were, but have not reproduced them, because they are identical to those included as part of Trianon above.  These are all the parts that lean heavily on the Jews:

Chapter XVI -- Who Are Responsible for the World War?

Chapter XXIV -- Europe in the Grip of International Financiers

Chapters XXVI and XXVII -- How Can Peace be Restored to Europe? & An Appeal to the American People

When the Hungarians opposed the outrages of those Jews, the cry of "white terror" was sent broadcast, and Count Teleki says "we (Hungarians) had no means to defend ourselves," for the reason that the dissemination of news and, therefore, the means to mold public opinion, were in the hands and control of Jews in Europe. Those Polish and Russian Jews could torture the Hungarians,--they could wait in front of Christian Churches for the Hungarian Christians and as those Christians came out of the churches they could be hanged to the nearest trees; but Christian civilization did not hear of it. But if a Hungarian Christian happened to step on the small toe of any of those Jews the Jew had yelled so loud, that the whole of Christendom had heard it.

A little off track, but this was the best place I could find for it.  Thus, we switch from Hungary to Germany: 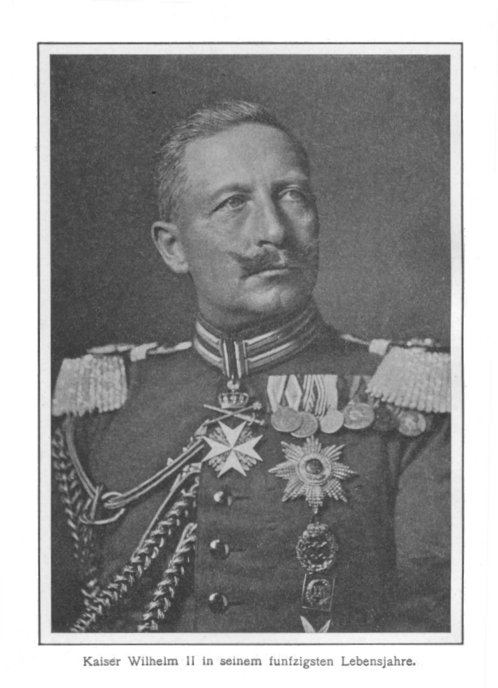 The above portrait was taken from Im Vaterland by Paul Valentine Bacon (Boston & NY: Allyn and Bacon, 1910).  This was a high school language instruction book.  It's amazing what they were doing in American high schools in 1910 -- teaching German, in the Fraktur alphabet, no less.  And it wasn't "see Dick run" either.  It included discussions of Die Walküre and Siegfried und die Götterdämmerung.

The Kaiser of Germany was a great man, but unfortunately very naive when it came to Jews -- this was his undoing.  He surrounded himself with Jew "advisors" (it was the "progressive" thing to do) and did not impede Jew banksters.  He helped Lenin to St. Petersburg because he knew it would lead to Russia's withdrawal from the war.  It did.

"A Jew cannot be a true patriot. He is something different, like a bad insect. He must be kept apart, out of a place where he can do mischief -- even by pogroms, if necessary. The Jews are responsible for Bolshevism in Russia, and Germany too. I was far too indulgent with them during my reign, and I bitterly regret the favors I showed the prominent Jewish bankers." (Kaiser Wilhelm II as quoted in the CHICAGO TRIBUNE, July 2, 1922)

Says Heinz Weichardt:  "Kaiser Wilhelm was an utterly civilized and peace-loving man.  I know this from the British mother of my best friend; she was a close personal friend of Wilhelm who in turn was my friend's godfather.  The Kaiser did suffer unfortunately from an inclination to vainglorious gab and this was used quite liberally against him by his enemies."