Links are not maintained here and may expire.

Removed 14 Nov 13: From 21 Sep 2013 rev entry: If anyone has an interest in translating all or part of this rare book, or in doing an analysis of the text to determine the relative importance of various sections so that smaller parts may be translated, please contact the Webmaster at the e-mail address located toward the bottom of this page.

Removed 30 Mar 12:  Arthur Henderson -  "Reflections on Race and Spirit", an essay on achieving an appropriate balance. 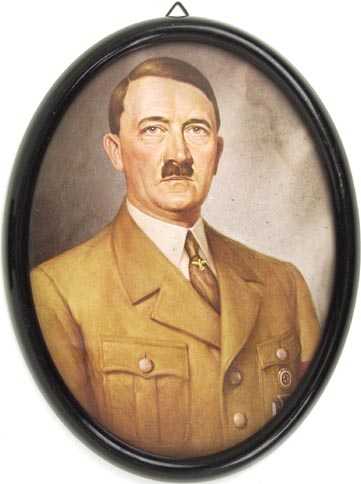 "A principal reason for the failure of National Socialism to attract adherents is its lack of hypocrisy."  -- http://www.cwporter.com/forgiv.htm

-- from http://www.sundayherald.com/52035, "Torture of Iraqis was for ‘stress relief’, say US soldiers" by Neil Mackay, Investigations Editor.  Hmmm, if the use of torture and humiliation by U.S. armed forces in 2003-04 was "a grey area" and if no matter how much force or humiliation was used it was "within [the Geneva Conventions]", I wonder if the same could be said about German armed forces in 1939-45, even if all the things said about them were true?

JRBooksOnline.com proudly takes note of the death of SUSAN SONTAG, the jewess who, you must recall, stated that the White race is "the cancer of human history" while she simultaneously "campaigned relentessly for human rights" (scotsman.com).  Well, a lot of us out here realize what tribe actually constitutes the cancer of mankind, and always have, as proved by ample historical testimony, a tiny portion of which may be seen at this site.

Was there perhaps more meaning conferred here than she intended?  Oh sure, saying this is the inverse of saying "a SS# is like a CIS# for humans", but in the heat of the moment, some "short-cutting" is inevitable.

"There are some 15 Jewish soldiers among the 45,000 British fighters currently in action in the U.S.-led campaign."  -- Haaretz.com (English edition), Sunday, March 23, 2003 merrily admits as it details all the special consideration given those 15 precious soldiers.
Hey, it would be uncharitable to think that the Jews of Britain don't give their full contribution to the armed forces of their country -- to even suggest this would be an "anti-semitic canard".  Yep.  But 15/45,000 equates to just 0.033%.  Even "system" sources, who are bound to be very deferential to the Jews, admit that there are at least 300,000 Jews in the UK out of about 59.5M total, or about 0.50%, so the Jews are underrepresented in the UK military by a factor of 15-to-1, at least for the current "Operation Iraqi Freedom".  Jews certainly don't have proportionately fewer young people in their population relative to other ethnic groups.  You can easily find estimates of UK Jews that are double that shown above.

See links page for essays on the Dresden bombing. 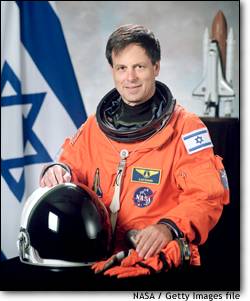 As posted to FAEM.com --"With all the endless talk about how wonderful it is to have a space jew, especially a war hero (criminal) and son of "holocaust survivors", why has no one pointed out the irony that there would not even have been an American (or Russian) space program without Nazi Germany?  I guess that question pretty much answers itself." -- B.A.

There's lots of info about the critical role the Nazi rocket and jet programs had in making the later space programs possible -- do a search and educate yourself!

Michael "I ain't no nigger tonight" King, son of Daddy King.
"MLK" was a pseudo-communist pawn with jewish funding.
See more at Slaves and Masters. 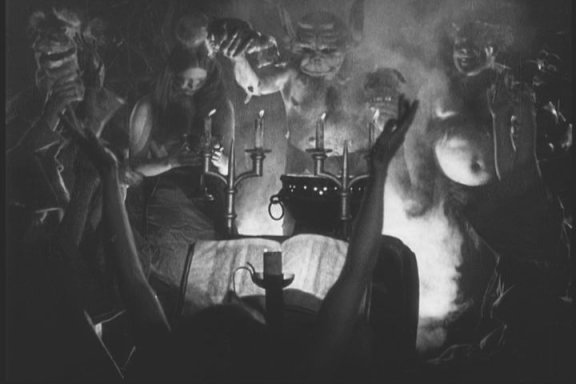 Here, Rabbi Shmuel Lipshitz Schmeckelbaumer of Temple Beth-xxxxxx, Teaneck, New Jersey, provides insight and inspiration to his congregation by the application of a few "harmless ancestral rites" (per Dr. Cecil Roth), spreading love for humanity all over the world.
More pics, with a note on the source.

Every government is run by liars and nothing they say should be believed.  -- I. F. Stone

"They look down always with their heads bent to the ground like cattle; at the banquet they feed, fatten, and fornicate. To get their fill of such things they kick and butt each other with iron horns and hooves and kill each other. They are insatiable as they do not fill the real and continent part of themselves with true realities." – Plato, The Republic, Chapter 9, line 586.

Pravda:  "Sodomy Returns to Afghanistan".  As before.  See the Eastern Sexology page for details.

NOTICE:  Some of you out there may have received unsolicited e-mails that appear to emanate from JRBooksOnline.com.  The supposed 'sender' may be the site e-mail address as noted farther down on this page, 'jrbooks' or something similar.  All of these are falsified.  This site does not participate in any Yahoo or TopicA newsgroups, nor does it send 'spam' regarding the Middle East or any other topic.  -- JR

As a parting shot to black history month (USA), I would like to reproduce two images from Richard F. Burton's Lake Regions of Central Africa, 1860.  For those of you who are from outside the USA: Contrary to what you may have been led to believe, black history month is an utter non-entity among celebrations.  Nobody White pays it any mind at all, and even most blacks neglect it.  It is purely an artifact of an imperial, federal system gone mad. 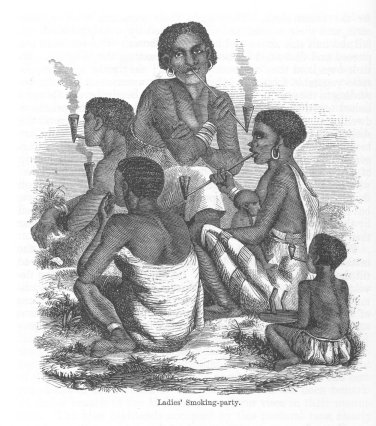 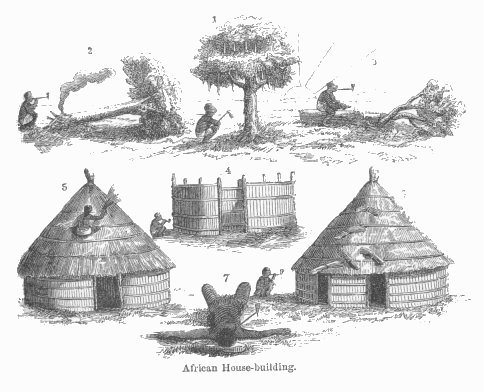 Remember the attack of the internationalist culture-destroyers!  Remember forever the sacrifice of those innocents.

"Trotsky was right — you must be ruthless."

She actually said that.  The specific context was her favoring maximally severe treatment for accused terrorist-abettor John Walker.  After this, I heard no gasps of horror, no jaws dropping and hitting the floor.  Nope, everyone just went on talking and then the hosts calmly switched to something else.  Can you imagine anyone but a Marxist purveyor getting away with this on a major cable TV channel?  Can we say that network "news" is a bit, er, left-leaning?

Oh yeah, Ann is a "Jewish World Review pundit."  They just can't help tripping up in an unguarded moment.

"I do not even shrink from a statement that is not going to make me popular in Germany: if the Germans destabilize Europe anew, in some way or other, then partition is no longer what will have to be resorted to, but rather that country will have to be erased from the map, pure and simple. East and West have at their disposal the advanced technology necessary to carry this verdict out."  -- Lech Walesa, Polish Prime Minister and 1983 Nobel Peace Prize laureate, as quoted from an interview published April 4, 1990 in the Dutch weekly Elsevier.  Walesa was/is widely described by the press as a "human rights advocate".  { Source. } 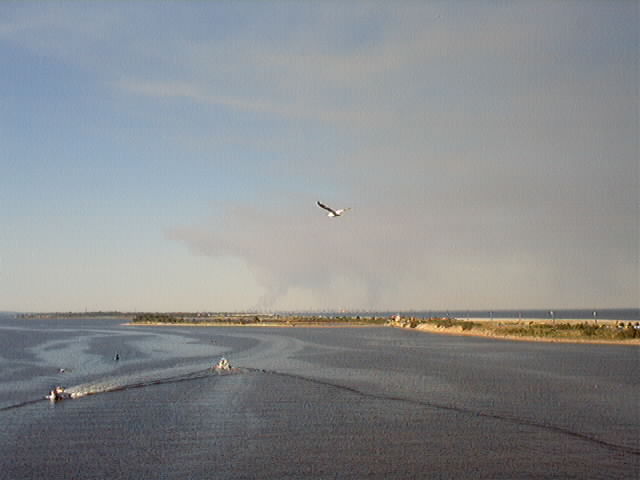 Jesse's "Hymie-town" gets it on the nose:  Souvenir photo, from Highlands, NJ.
This is from about 23 miles away, across the big bay.  The land in front is Sandy Hook.

The new "Planet of the Apes" has now arrived from Hollywood.

"It [the movie] could have dealt with the intriguing question of whether a man and a gorilla having sex is open-mindedness, or bestiality (and, if bestiality, in both directions?)." 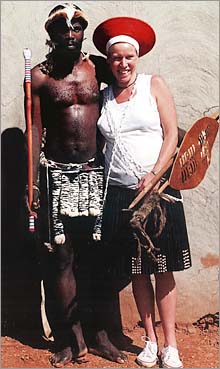 PIC AT ABOVE LEFT:  "A meeting of cultures: Sofi Cogley and Robert Ntshalintshali on their wedding day in South Africa. Photo: Justin Cogley"

Wonder if they'll do a follow-up report?  Full article at http://www.smh.com.au/news/0105/13/features/features1.html#top

The close is a gem: "The goat slaughter is the least of the sacrifices that have characterised the union of Sofi and Robert. Hopefully, as South Africa moves into a new era, the rewards will follow."  What these "rewards" will be exactly is left to the reader to speculate upon.

For a good article re. the falsification of history (this time on gun control), see http://www.worldnetdaily.com/news/article.asp?ARTICLE_ID=22899 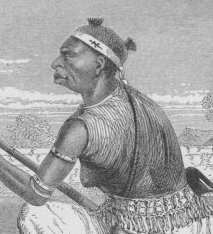 A leopard can't change its spots

"I have many times as an adult Jew suspended heart and pulse beats in expectation of engulfing riptides of anti-Semitism to lash out across America.  I've feared thunderclaps.  I've never gotten more than a butterfly's belch."

Hitler had said, "And so I believe today that my conduct is in accordance with the will of the Almighty Creator.  In standing guard against the Jew I am defending the handiwork of the Lord."  -- Mein Kampf, vol. I, ch. ii

"Rabbi Ovadia Yosef said in a sermon on Saturday night that Hitler's victims were 'reincarnations of the souls of sinners, people who transgressed and did all sorts of things which should not be done.  They had been incarnated in order to atone.'"

-- as reported in the 'electronic Telegraph,' Issue 1900, Monday, 7 August 2000.  Rabbi Yosef is the Sephardic head of the Shas Party in Israel, and a former chief rabbi.

"Rabbi Ovadia Yossef . . . said: 'It is forbidden to be merciful to them. You must send missiles to them and annihilate them. They are evil and damnable. May the Holy Name visit retribution on the heads of the Arabs and cause their seed to be lost.'"

"Nothing is more certainly written in the book of fate than that these [the negro] people are to be free; nor is it less certain that the two races, equally free, cannot live in the same government. Nature, habit, opinion has drawn indelible lines of distinction between them."

"There is no greater sorrow on earth than the loss of one's native land."  -- Euripides

"There is no expedient to which a man will not resort to avoid the real labor of thinking."

-- Sir Joshua Reynolds (18th century English painter).  Thomas Edison ordered this put up all around his lab in West Orange, NJ as a reminder to his workers.

The Jewish version of "equal justice under law" and "due process":

-- Ariel Sharon to Israel Radio, as reported by The Washington Times, March 26, 2001, "Sharon rips U.S. probe of violence as mistake".